Indira Challenge #2 (and a garden update)

I hereby promise not to post every night with the results of the Indira Challenge.

However: tonight we achieved the challenge in the following way: we used some of our wall planter dill on the salmon, asparagus and brie tart that I made for dinner.  There's also mint in the fresh batch of green tea ginger iced chai that I made this afternoon.

In additional news - as awesome the T2 green tea ginger iced chai is, it's not so great while one is eating icecream. It takes a few minutes after finishing the icecream before the impressiveness of the iced tea returns.

Indira Naidoo is my role model.

I remember watching her when she was an ABC TV presenter, and I'm not sure whether she was ever a BTN presenter, but whether she was or not, she was a role model of my youth.  Even if it was just as the weekend newsreader for ABC.  I thought she was completely and utterly awesome, and still do think that.  And now I have her garden-and-cook-book.

Anyway.  (Should that be my catchprase?)

Indira set a challenge in her awesome book about her balcony garden: try to include something from your garden in every meal.

I'll focus on evening meals (I suspect Indira meant the same) and I know we don't manage to include something from the garden in every single evening meal, but I am going to try.  Particularly this summer, but from now on I'll be looking at Indira's book, Stephanie Alexander's book and the classic Yates Garden Guide, and doing my best to
plan ahea
d
(inside family joke)

and work towards having a four-seasons garden if we possible can.

That's the next goal.  The current goal?  The Indira challenge: use something from our garden in as many evening meals per week as possible.

Dinner - and a plan for summer

We decided tonight that we wanted to have salad for dinner rather than the pasta we had planned. The temperature reached 28.5 degrees today, which is nowhere near the highs we will get later in the year, but we declared it too hot to cook.

Anyway: the salad includes: lettuce, rocket, spinach, mint, coriander (all from our garden) as well as brie, walnuts, onion and bacon.  We also had garlic bread, which could also have been turned into croutons and this is what will happen next time.

It was totally delicious, and so much of it was from our garden!

This is something we really need to keep doing this summer: lots and lots of salads.  We still have cos lettuces that haven't got to the point of picking yet, as well as baby spinach we planted in The Wall this week.  I may separate out the lettuces from the first 6-pocket to the top two of the second six-pocket just to give them a little more room to grow.  'Cause we want lots of lettuce this summer.  And other things, too!

So, after the disappearance of Mystery Plant #1 AND all our cucumbers, I'm somewhat wary of blogging about our mystery plants.  I don't want them to disappear just because I blogged about them.  (Yes, I'm paranoid.)

However, those we've already pulled out cannot be affected by the blogging jinx, and today I discovered a rogue tomato plant.  We'd decided quite some time ago that we would pull out any rogue tomato plants.  Rogue tomatoes come from supermarket tomatoes, which are not the greatest in terms of eating quality, especially in the second generation.  Last year we had three rogue pumpkins and two rogue tomatoes (I think) and the tomatoes in particular took over the back garden  (see photo) for no real profit of taste or quality.

So, we figured we'd pull any and all rogue tomatoes we found.  Today we found our first - and pulled it - and a suspected second, that we're going to leave for a few days, just to confirm that it IS a tomato, and then we'll pull it.

This weekend's intended purchases include:

Okay, it's not always successful.  I added carrot and zucchini (grated) to an attempted Mexican lasagne, but I didn't cook it as specified and it didn't end well.

But we do still try to add veggies to pretty much everything we can, and as much as we can.  Because the more serves of veggies we can add to a single dish, the fewer dishes we need to wash.  And fewer dishes is a good thing.

Anyway, I can guarantee that there will be more posts on this topic anon.

So, this was the six-pocket planter the day we planted it: 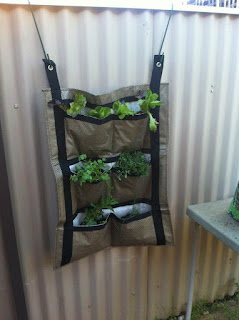 And this was the six-pocket planter today: 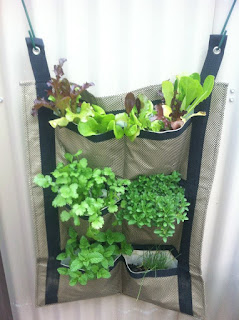 Pretty much everything is going ridiculously well.  Including (knock on wood) the coriander.
Posted by Heidi at 21:53 1 comment:

So, apparently, have all three cucumber plants.

Meanwhile, today we will be planting another cherry tomato (because the first is looking stressed, and clearly the best way to ensure that it picks up and provides us with far too many tomatoes is to plant a second plant), and setting up a fourth wall planter with dill (at the moment) and other plants to come following next week's Farmer's Market.
Posted by Heidi at 16:23 No comments:

For the record: H thinks this is a zucchini, S thinks it is a pumpkin. All we know is, we didn't plant it. (Last year we had three rogue pumpkins and at least three rogue tomatoes.)

We'll see who is right anon. 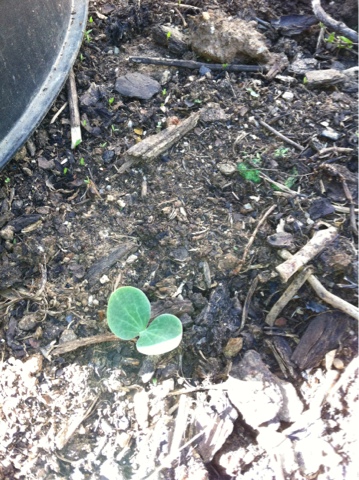 The two Jamies (and the one and only Indira)

Yesterday afternoon was a tale of two Jamies; Jamie Oliver and Jamie Durie.

We went out in the afternoon to Trade Secret to pick up the Jamie Oliver 3-in-1 peeler (with julienne and soft-fruit blades) which we'd been looking at for a while and finally bought because summer is coming on and we want to have salads to eat during the week etc).

We also went to Big W to buy an additional wall planter, having bought two Jamie Durie 3-pocket planters on Saturday and planted them up early Sunday afternoon.  They look and seem to work well (so far), and we were impressed enough to decide we wanted another one.  Knowing that we eventually want to move back to a city at some point in time, and knowing that we're both happier in Inner City rather than suburbia, I'm keen on thinking about gardening in small/confined spaces.  It's not as though we've got unlimited space now, of course.  Comparatively, we have a fairly small growing space (although it's a lot more than we had when we first moved in - a story for another time) and these 12 (two 3-pocket and one 6-pocket) planter pockets give us more herbs (mostly) than we could otherwise have.

So, to keep up the garden stocktake begun in this post - we've now added (in the Jamie Durie wall planters)


I must point out that part of the inspiration for our wall-hung gardens came from Indira Naidoo, who I remember as a newsreader from from my youth.  I thought she was awesome then, and now that I have her cookbook/patio garden book, I only think her even more awesome.  She'll no doubt feature later in this blog (we keep saying that we'll choose a feature cookbook each week to menu plan from, but we haven't quite gotten there yet.)

When we were planning the back garden I wanted a small part to be a flower garden, because I love flowers.  For the OH, gardening is a brand new experience, and while she can understand growing things to eat, she doesn't get growing flowers yet.  And my small flower garden has had to cede ground to the edibles as we've become more confident and have wanted to grow more (lettuces are in the middle of the flower garden this year), but I've also added edible flowers (yay, nastursiums!)

One of the flowers the OH has taken a great deal of interest in, however, have been the lupins.  She's a Harry Potter fan, I'm a semi-fan.  I've read all the books, seen all the movies, and love certain elements, but still don't consider myself a full-on fan.  And yet, the three lupin plants we planted last year were quickly dubbed Remus, Tonks and Teddy.

Sadly, Tonks didn't survive the summer (or the final novel - sigh).  She simply never flourished.  Remus has grown the best of the three, and Teddy did well but never flowered, and has had to be saved from weeds a few times.  At the moment, Teddy is under attack from a ground cover I planted called "White Surprise" (I can't find the scientific name right now (recording such things is part of the reason for this blog) that we've nicknamed the Coloniser because it's taking over so darn well.  I don't want to let him be overtaken, not when Remus is doing so well (two flowers blooming at the moment).

We planted another three lupins last week, and we haven't yet named them.  Suggestions so far have been that one ought to be Sirius, the "honorary" Lupin; the werewolves from True Blood (which OH watches but I don't), names from Melissa de la Cruz's new Werewolf series...  I've just realised that if we call one Sirius, another should be Bill, which leaves one Lupin and/or werewolf to be named, although I suppose we could go with Fleur, who married Bill...
Posted by Heidi at 19:26 No comments:

Our Garden (without any actual up-to-date pictures)

I wanted a way to document our vegetable garden as it grows, beyond making occasional notes in the Stephanie Alexander Kitchen Garden journal which I don't update on a reasonable frequency.  And so here we are.

I don't yet have decent photos of this years garden, however: so far we have planted the following -


We also (well, it was mostly me - the Other Half doesn't understand flowers) planted lupins (see more below) and a punnet of petunias are awaiting my pleasure - which will hopefully occur tomorrow.

We transplanted the mint, which was struggling in its pot; and we already had sage, rocket, parsley, and oregano.

We have a pot given to us by my cousins with a bay tree, thyme, and some struggling chives; and somewhere in another pot should be some rosemary.

So, that's the garden as it stands.