So I spent some time on my wardrobe today: not all the time I need to spend, but a decent amount.  I didn't get anywhere near looking at the various things that are boxed up, but given how long those boxes have in general been packed up (since before we moved into this house) those items will no longer fit and will basically go straight out, either into the bin or to my church's Community Shop.  I already have two boxes ready to go, including about six winter skirts and three blouses that I cleaned out of my closet today (all two to three sizes too small), as well as throwing out 4 discoloured white blouses, one handmade skirt that has served me very well for over ten years, a denim jacket that was discoloured at the neck - and thus isn't worth sending to the shop - and a stained longline cardigan that I do not want to get rid of but have to.

I also made some progress on putting together my February Project 333 capsule.  As I mentioned in my previous post, this capsule is just for the one month, to get me back into the cycle that I feel works best with the climate where I am.  Some of my considerations for my February capsule include a weekend in Sydney to attend a concert at the Theatre Royal; the general climate for February (hot, generally with highs above 30); and the fact that my capsules don't actually cover my work clothing, which is a uniform. 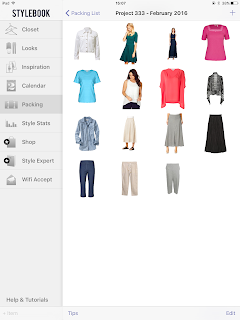 As for my actual Project 333 - currently my plan is as follows:

Things of note: I find it really difficult to photograph my clothes, so I try to pic up photos from the internet, preferably from whatever store I've bought it from, but when I'm trying to get photos of older items (or I forgot to find the photo when I bought the item) I just go for vague approximations.

Clearly there is no defined colour palette, which is related to another problem I've discovered: I have far more bottoms than tops.  Which is totally not a balanced wardrobe!  So, there may be some top-shopping in my near future.  I would love to find a more palette-appropriate top that I could swap in for the coral, which really doesn't suit my other colours for this season.

I honestly don't know whether I should add one pair of long pants in case of unseasonably cold weather, but with a pair of 3/4 length jeans in the mix I think I ought to be fine, especially as February is often the hottest month of the year.

Except for the dearth of tops - and needing to make a decision as to whether I add two or three t-shirts for out-of-the-house wear - I think this may be the clothing part of the capsule.  Which is not bad at all (but this is, again, only for a month.  Three months provides a greater challenge due to climate variations).  I'm hoping I can choose four pairs of shoes, and then toss in accessories.  The current numbers would leave me with space for about seven accessories, which for me would be a LOT.  (That said: two bracelets, one necklace, leaves only four pairs of earrings which - not actually a lot.  But then, I've never really had any intention of including accessories (or shoes) in my P333 capsules.

There's still two days left in this month, so I hope I'll be back on Sunday with the final word on my February collection.

This week has been a struggle, healthy eating-wise. Monday and Wednesday I didn't get around to making salads (Tuesday was a public holiday) but for the first day back at school with students, I managed to do salad for both M and I.  I'll do another two for Friday, which will make choosing what to eat for lunch easy for me, as I'll be having my day at home.
So, today's salad was:
Dressing: half a clove of crushed garlic, olive oil and balsamic vinegar and a little chopped fresh dill.
Hardy vegetables: carrots, the surviving snow peas from a couple weeks' ago.
Less-hardy vegetables: M had fresh tomato from the garden in hers.
Protein: butter beans and salmon furikake.
And then lettuce.


Things I have learned:
Posted by Heidi at 11:42 No comments:

If I ever actually wrote all the posts I promised for this blog, it would be a very different blog!

I've been wanting to get back into Project 333 for a while now, but I've never been organized at quite the right time.  As I may have written here before, the Jan-Mar/Apr-Jun/Jul-Sep/Oct-Dec breakdown simply doesn't work for seasons where I live.  It seems to me to make more sense for the breakdown to be Mar-May/Jun-Aug/Sep-Nov/Dec-Feb.  But I'm also in a headspace right now to get back into Project333, and I don't want to hang around until March before I start, as I'm certain I'll lose that momentum.
So on Friday I'm going to be putting together my February-only Project 333 wardrobe - and entering items into Stylebook if they aren't already there.  Part of my Project 333 is going to be tracking what I wear (OTHER than my work uniform, which I wear four days a week, and is very boring and I'm so very over it), because I do want to smarten up my wardrobe.  I said this about six months ago, and it's still the case.  Particularly as it's been warmer these last few months, I've fallen back into jeans and t-shirt, especially baggy t-shirts, because I'm having body image issues.
So - hopefully I'll be back again on Friday or Saturday with a report on my chosen wardrobe for the month of February.

Sadly, I'm doing one of those standard bride-to-be type things: trying to lose weight.  However, I'm also just plain trying to improve my health, whether that results in weight loss or not.  I know I need to eat more healthily: one of my major goals is to work towards actually achieving the five servings of vegetables and two fruit that is the recommended daily amount - and believe me, given my general aversion to fruit, this is going to take some work on my part.  And five servings of vegetables is a LOT.

Then there's drinking enough water and getting enough steps... and then enough cardio on top of that.
I'm working on choosing one aspect each week and focusing on getting that up to scratch, then the next the next week, etc.  Sometimes I feel like I'm moving far too slowly by doing this, but it's better to move slowly than to rush through and then give up because it's all too hard.
Something that I'm finding surprisingly helpful is the Nudge app.  I downloaded it on the 4th of January to help me keep track of my daily servings of fruit and vegetables, but it does so much more than that and I really appreciate the extra bells and whistles: I can also keep track of water consumption, it's connected to my Fitbit account to bring in the number of steps I've taken, and I can track additional activity as well (although I also do that in My Fitness Pal which links with Fitbit for non-step activity: once I get back into a few other regular activities like swimming and yoga, I'll see about tracking them there. Via Apple Health it picks up my sleep data from Sleep Cycle, and takes all this data together to create a "nudge factor" based on the last 30 days.  Obviously I haven't yet been using the app for 30 days yet, so I'm not yet at an accurate picture of what it says my health is (I know my health isn't great, but I hope there's not quite so much red compared to yellow and green once there's a full 30 days of data to work from.  On the other hand, because of the law of averages, at the moment my Nudge Factor keeps going up each day, whereas it will no doubt plateau once there are no more "0" data days.

This is probably the most successful 'gamification' of health that I've come across, moreso than Health Month, which I used for a couple of years, but was much higher maintenance than Nudge.  I say this a lot but I really do intend to come back with an update on how its all going in about a month's time.
Posted by Heidi at 09:00 No comments:

M is on school holidays, so at the moment I only have to do lunches for my four days a week at work.  It's summer, and combining that with wanting to increase my servings of vegetables to something near to the five-a-day one is "supposed" to eat, I'm all about salad.  Once M is back at work I might switch out week by week with bentos, but I really do love doing a little bit of work on Sunday night and having lunch for four days ready to go.
The thing with mason jar salads is that if you get the layers right, there's little to no danger of soggy lettuce (hence making them on Sunday for the rest of the week.
You start with your dressing: this week I went with sesame oil, garlic, chopped shallots, and a dash of white vinegar.
Add "hardy" vegetables; carrots, green beans, the vegetables that won't soak up the dressing too easily.
Then the less-hardy vegetables; for me this was capsicum and the left over summer squash salad (patty pan squash, zucchini and chopped up potato) that we'd had for dinner.  I was going to add snow peas, but decided that my little 360ml jar was looking full enough already.
Next is protein.  Last week I had chick peas - this week it was an Asian-style poached chicken, poached in water with mirin, soy sauce and sliced garlic.  I topped that with salmon flakes made using Makiko Itoh's recipe (this is one of my favourite things to do with leftover salmon.  In fact, I generally take off a chunk intentionally once I've cooked salmon, before serving.)
Then, fill the rest of the jar with lettuce, and you're good to go.


By my calculations, this counts as 2.5 to 3 servings of vegetables, and gives me a delicious, carb-free lunch that was relatively easy to make ﻿and﻿ used up leftovers!